I have always found an interest in the relationship between two-dimensionality and three-dimensionality. As a young artist, the concept of drawing a tangible and textural object on a flat surface was fascinating to me, and I soon developed a passion for depicting the likeness and verisimilitude of objects in space through very careful and meticulous observation. I still remember the first “rule” of my elementary drawing class, one that I carried forward into my work as a young adult: “Draw what you see.” This underlying principle made sense to me; objects had shape, weight, texture, and took up space. They could easily be depicted in a drawing by simply recording what was observed in my own eyes. The relationship was one-sided: I saw an object in three dimensions, and I depicted it in two.

More specifically, my focus became how to use line created by various forms and methods of drawing in order to convey the spatial qualities of seemingly “known” three-dimensional objects or frameworks. I began with the material: a wide variety of string, twine, and rope is used throughout the exhibition to demonstrate line and the variety of ways one can use it to draw the objects’ three-dimensionality. From the thin marks and subtle value changes exemplified in graphite pencil, to the gestural strokes of pastel, to the thick and bright quality of a highlighter pen, the different types of line used in drawing are explored here. Even stacked blocks of wood and other more indirectly linear materials are utilized to show the range of line in space, as line becomes mass. I then focused on the process of applying this linearity to the objects themselves. Material is tightly wound, closely weaved, and firmly packed in and around these objects, emphasizing my desire to “map” the intricacies of the space these objects take up; the space that makes them uniquely three-dimensional.

Finally, the objects themselves represent another important aspect of my concentration. Upon first glance, many of the objects appear to be something we recognize: a wheel, a door, a chair. However, the intense application of textural material somewhat distorts the objects and what we thought we knew is called into question. The greater the frequency of the line, the less functional the objects seem to become. Therefore, at the heart of my exhibition lies the interplay between prior understanding and a new comprehension caused by this study of dimensionality. The artistic process behind each object is aimed at explaining and defining the contours and shapes that make up its spatial and perceptual “truths,” while at the same time the process distorts the purpose or even the identity of the object itself. Eventually, by learning to forget preconceived notions, we allow ourselves the opportunity to understand new artistic realities. We are constantly in a state of rediscovering the known. 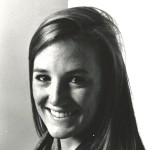 Maggie Pyle is a senior studio art and economics double major from Bronxville, NY. Maggie has exhibited in the Hanes Gallery’s annual Student Art Exhibition where her work was accessioned into the John P. Anderson Collection of Student Art. She has promoted the Wake Forest Fund by crafting the postcard artwork for the annual Alumni Fundraising Drive distributed in 2011 and designed the Brian Piccolo Cancer Research Fund’s annual Hit the Bricks logo in 2013. She also interned at the Tierney-Gardarin Gallery in Manhattan during the summer of 2012. She has been able to expand her horizons into many new media while at WFU and hopes to continue her artistic growth while working at PNC Bank in Pittsburgh after graduating in May of 2014.